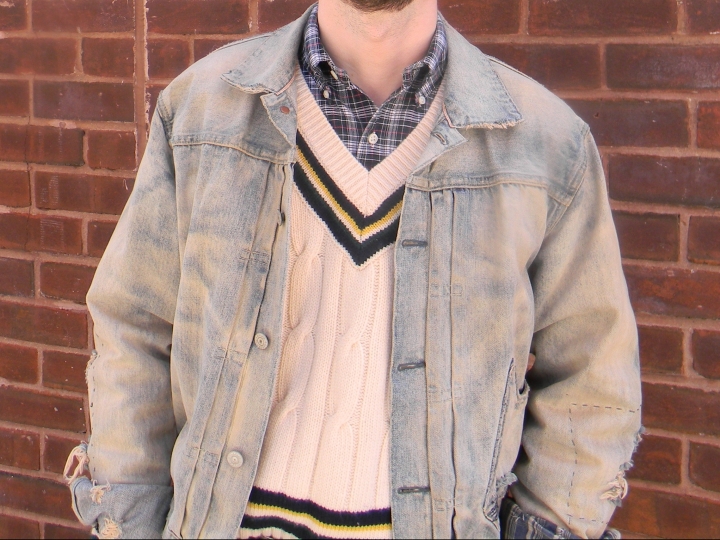 Cricket season is nearly upon us here in the Northern Hemisphere, so now is the best time to buy the sweater typically associated with the sport. Unlike most every other garment in existence today, not much is known how or where the knitwear became an essential part of our wardrobes. In fact, it’s not only been associated with cricket but also golf and tennis. Sleuthy fashion historians have dated the original jumper all the back to somewhere between the late 1800s and 1920s, so it has quite a history.

Despite the unclear timeline, the sweater is firmly rooted in prepwear. Just like rugby shirts, the cricket sweater began its life as a uniform for preppy men who played the sport and as the sport itself grew in popularity, the fashion industry assimilated the style and reinterpreted its meaning. As such, the sweater looks great when worn with other pieces that revolve around the same trend, but today’s crazy fashion rules have opened up new opportunities in coordinating outfits. They can be made from cotton, wool, or cashmere and are traditionally mostly white, making the knitwear a prime piece for layering or toning down a wild outfit.

Just because the cricket sweater has stuffy roots doesn’t mean your outfits have to look stuffy, too. The key, while mixing in other prep-inspired pieces, is not to think too much about matching the sweater. Intentionally wearing clashing pieces is much easier with this sweater because it is a neutral white and will draw attention away from all the patterns you’re wearing. The black crossbody bag and boots, also neutral, help tone things down even more.

This is a great look for men who don’t want to be too loud with their outfits. Since jeans go with everything, that’s the best place to start. Just add a neutral pair of boots, a black belt, and a simple patterned shirt. You could even get away with wearing no shirt underneath, if you’re feeling slightly adventurous.

If you don’t have to wear a tie to work, this look could work for you. Otherwise, if you feel like turning the prep up to 10, just go all out with critter-embroidered chinos and a tweed cap. The modern boots and basic unbuttoned shirt help keep this fit from looking too costumey.

My initial idea for this outfit was to wear a full suit, but unfortunately, that thought was dashed when I realized that my sweater was wool and oversized. Since tweed is now out of season (and that is the only suit I have that would look right), I figured I’d show you something you can wear today, now that the weather has begun to warm up. Though it may not work for the suit-and-tie crowd, those guys who have a little more leeway should be able to get by and grab some compliments.