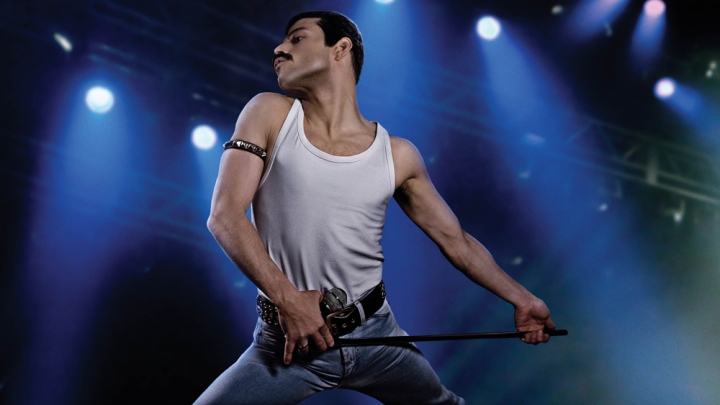 As a follow-up to the film’s Best Drama and Best Actor in a Drama Golden Globe wins and a prelude to the Oscars for which it has been nominated for Best Film, I felt it was time to finally review Bohemian Rhapsody. I never had much exposure to Queen when I was growing up, but of course I heard their songs. I was once told that “We Are the Champions” was a gay anthem because the singer was gay. This is before I even realized I was gay myself, so I took it with a grain of salt. I had video games to play.

After growing up and getting more educated in pop culture, I learned that the band was both revolutionary and iconic in the music industry. The lead singer Freddie Mercury contracted HIV at a time when the virus was a death sentence, and he was taken from this world regrettably before his time. I went in hoping that this movie would inspire me to do more research, doing the band and the singer justice since I barely knew anything about them outside their hits. Just a warning: since this is a biopic and based on true events, there may be minor spoilers throughout this review.

The movie begins prior to the formation of the band and shows how the members met. We start with Farrokh Bulsara (Rami Malek), the man who would eventually become Freddie Mercury, living a somewhat normal life as a college student with a part-time job. He loves to sing and has convinced himself he is destined to be an international superstar.

One night, after attending the performance of a local group called Smile, he decides to introduce himself to them. Their lead singer suddenly quits minutes beforehand leaving Brian May (Gwylem Lee) and Roger Taylor (Ben Hardy) in the lurch and leading Farrokh to initiate something of an impromptu audition to replace him. After adding a bassist to the mix, John Deacon (Joe Mazzello), the four go on the road as a full-fledged band. Farrokh then legally changes his name, much to his father’s chagrin, and the rest is history.

Let’s get one thing perfectly clear: Rami Malek achieves a full embodiment of Freddie Mercury, complete with the vocalist’s famous overbite. Having honed his acting chops in Short Term 12 and Mr. Robot, this movie is yet another highlight of his career. Besides watching Malek shine, it was exhilarating to watch all the high-energy concerts complete with choreography, even though the actor is lip syncing. The final sequence is also quite emotional, even though it gets a little long and the audience is CGI. Being that Malek is not a singer and it’s difficult to reproduce a packed stadium, these slights are forgivable.

The big issue with this film is that it can’t seem to decide if it wants to go all in on the music or the ongoing background drama of the band. Instead of getting a great movie that succinctly represents one or the other, we got a mediocre one that halfheartedly attempts to cover both bases. As such, there is a predictable cycle of dramatic confrontation followed by iconic song creation and a subsequent band performance complete with how the world reacted to it. This all gets a little tired after about three of these cycles and the band goes on hiatus. It’s all a little too predictable and many of the conflicts either never get fully resolved or suddenly get tied up with a bow in one scene.

Moreover, Freddie Mercury has been renown as a gay icon, perhaps the gay icon, yet there isn’t much here about the secret life he lived that led to his contracting AIDS. Rumor has it he lived most of his life knowing exactly who he was and who he was attracted to, he simply never felt the need to publicize it, much like Elton John and David Bowie were at one time. Though this movie was certainly trying to stay out of R-rated territory, I feel like it handled his sexuality similar to the way it did every other conflict–with non-offensive kiddie gloves. One needs to ask oneself how important it is for a biopic to accurately depict its subjects.

I guess I could sum up Bohemian Rhapsody by describing it as well-produced, but not well-directed. It’s basically a popcorn flick to watch on a rainy day or with a big group of friends MST3K-style. Bryan Singer is so risk-averse that he seems to have purposely made a movie that would appeal to the greatest number of people, as he usually does. Arguably, that’s all 20th Century Fox cares about–getting as many butts in the seats as possible.

To be perfectly honest, if this film didn’t star the very capable Rami Malek, it might not even be worth watching. I did learn some things–Brian May is an astrophysicist, there was a time when the world could come together to help a people in dire need, Freddie Mercury was a crazy cat lady–but this was a missed opportunity to tell a story not many people know about the hidden side of a beloved band. Queen deserves better.