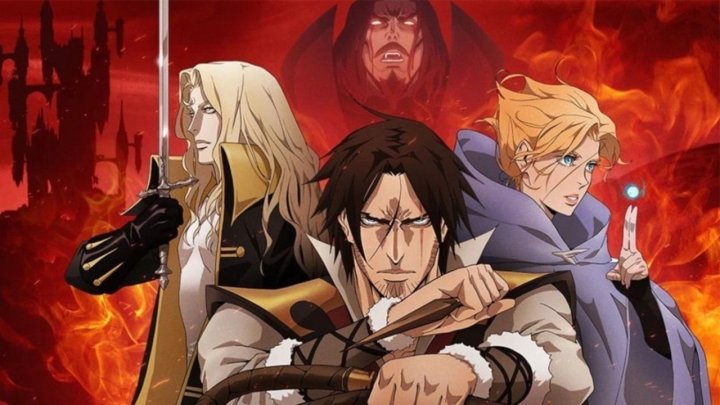 As a gamer, I’ve always been attracted to movies based on games. 20 years ago, they were a way of making characters with little or no dialog more engaging. Even though it was a critical and commercial failure, I loved the Super Mario Bros. movie when I was a kid. Mortal Kombat still remains arguably the best adaptation to date while, for me at least, the first Resident Evil and Silent Hill, while subsequent sequels sucked, are both great in how they told their stories, built their worlds, and created atmosphere. Unfortunately, most adaptations end up being terrible because the director either doesn’t stick closely to the source material or doesn’t show why their interpretation is worthwhile.

Thus, the Castlevania series which initially debuted in 2017 on Netflix was met with a bit of skepticism before viewing. Even reviews noted that what was there was good, but it was somewhat misleading to call it a series when it was only 4 half-hour episodes, barely the runtime of a standard movie. Perhaps the reason for this is that it was originally intended to be a film adaptation of Castlevania III: Dracula’s Curse. Thankfully, the creators stuck to the source material, creating a dark, depressing, violent world and using mostly established characters. It was a promising start, but audiences were still waiting to see where the show would go in its sophomore season.

The second season continues the story right where it left off at the conclusion of the first. Vlad Dracula Tepes, due to the horrific murder of his wife Lisa, has decided mankind is beyond saving and all should perish. Trevor Belmont, Sypha Belnades, and Adrian Tepes (Alucard) have joined forces in order to battle the vampire overlord and his horde of demons. Not only do we get to see the trio travel across the nation of Wallachia and develop their relationship with one another, but we also see inside Dracula’s castle as his scheming henchmen, two of which are human, fight to gain his favor, undermine him, or both. Developing the vampire into a somewhat tortured, reclusive genius-gone-mad represents a change from how he is usually depicted which is perfect for making him more relatable. In fact, I’d say this show is much more about the dark lord antagonist than our hero protagonists.

Though I love the games, I admit I’ve never followed the plotlines of any of them very closely. Usually story events are so scattered through the game that it’s tough to keep track of who’s doing what or why. Not knowing what’s going on has never detracted from the focus of the game–the gameplay. Perhaps that’s the main reason the story in this show is so great as several characters from the games make appearances alongside new ones never seen before. Instead of feeling like it’s a re-imagination of a game, it feels like it’s adding context to a story that that was pretty thin to begin with. Seeing events play out with characters from other games like Carmilla, Hector, and Isaac not only makes the show more dynamic, but brings the universe to life in a way the video games couldn’t do on their own.

In all, this season was a success in terms of plot, animation, action, and music. Evenly paced with a suitable episode of denouement setting up the next season, which has already been confirmed for 10 episodes. There are even a few Easter eggs scattered around for fans to find like a portrait of Leon Belmont, the first Belmont to battle Dracula. My only real issue is with the script and all the “fuck”s and “shit”s randomly inserted in dialog. Even though this is a mature and violent show, that kind of language is juvenile and disturbs the mood when it doesn’t add anything to the story or characters. I’m anxious to see what happens in season 3, if more characters like Grant Danasty make an appearance, and how they will link these events up to those in Castlevania: Curse of Darkness.